Below is a version of a post originally posted on the AWAL Blog. For the full article, please click here.

Now in its third consecutive year of growth, the United States music industry experienced a year of increases (and some predictable decreases) according to Nielsen’s 2017 US Year-End Music Report. On-demand audio and video streaming led the charge, while sales of albums and songs in the US were, overall, down. Also, this past year saw some interesting genre-based changes, along with one solitary song breaking multiple records.

Check out seven key takeaways below, and for Nielsen’s full 2017 report, click here.

Obviously, streaming had a massive year in 2017 and impacted the music industry overall. In fact, on-demand streaming of songs and albums drove music consumption in the US industry, which rose 12.5% from 2016 to 2017, with digital music consumption growing by 20.5% year over year.

2. Friday was the most popular day for streaming.

Although all days of the week were nearly equal, Friday accounted for 15.3% of all weekly audio streams, making it the most popular streaming day in the US. (Sunday, conversely, was lowest with 12.6%.) For video, the most popular day was Saturday (16.3%); Thursday and Sunday were least popular (14.1%). 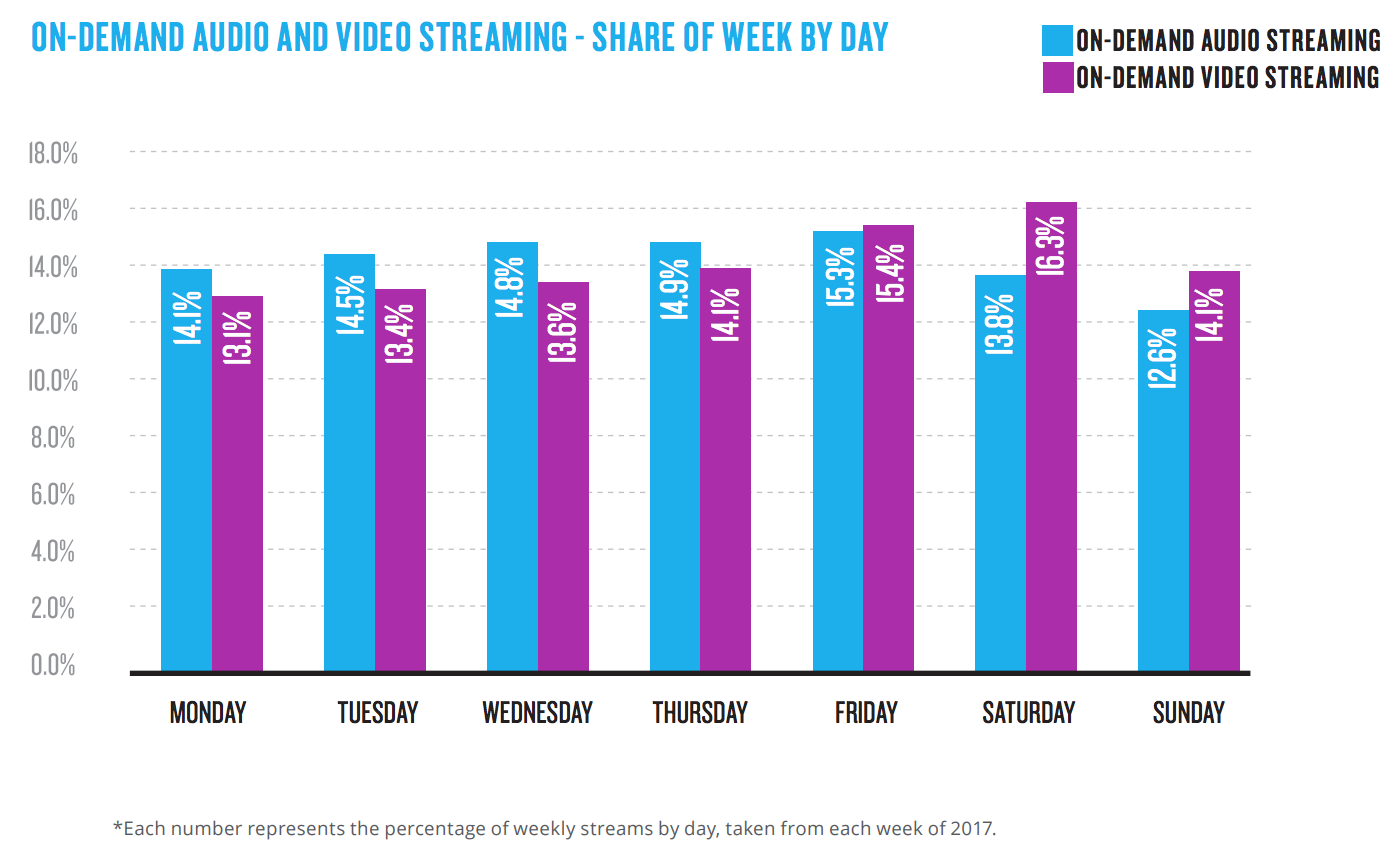 3. Vinyl is still experiencing a resurgence.

The once-considered-retro medium grew for a 12th consecutive year with a 9% increase in sales in 2017. Overall, vinyl accounted for 14% of all physical album sales in the United States, thanks in part to the bi-annual Record Store Day in April and November. And the top-selling record of the year? Who else but the Beatles with the 50th anniversary re-release of Sgt. Pepper’s Lonely Hearts Club Band, which moved 72,000 units.

4. Ed Sheeran’s “Shape of You” broke multiple records, include most weeks spent in the Hot 100’s Top 10.

This past year was kind to Ed Sheeran; his song “Shape of You,” co-written with songwriter and Kobalt client Johnny McDaid, spent the entire year on the US Hot 100 (as of this writing, it was sitting pretty at #19), including an unprecedented 33 weeks in the Top 10. “Shape of You” has earned over a billion streams and sold over 2.5 million downloads. Sheeran’s album Divide was also the most-consumed album of 2017

5. Cassette-tape sales increased for the first time in five years.

Cassettes are breaking out of their niche comeback with a 35% increase in 2017. The format experienced its largest growth since 2012 with 174,000 units sold. (It’s worth mentioning, however, that this is still a relatively small share of the overall recorded music market in US — compare those 174,000 units with vinyl’s 14.3 million in 2017, for example.)

6. In July, hip-hop became the most dominant consumer genre for the first time ever.

R&B/hip-hop accounted for 24.5% of total US music industry volume, fueled by digital song sales and on-demand audio and video streams — 69% of all R&B/hip-hop audio consumption came from on-demand streaming. Rock ranked second with 20.8% total volume, and pop was third with 12.7%. 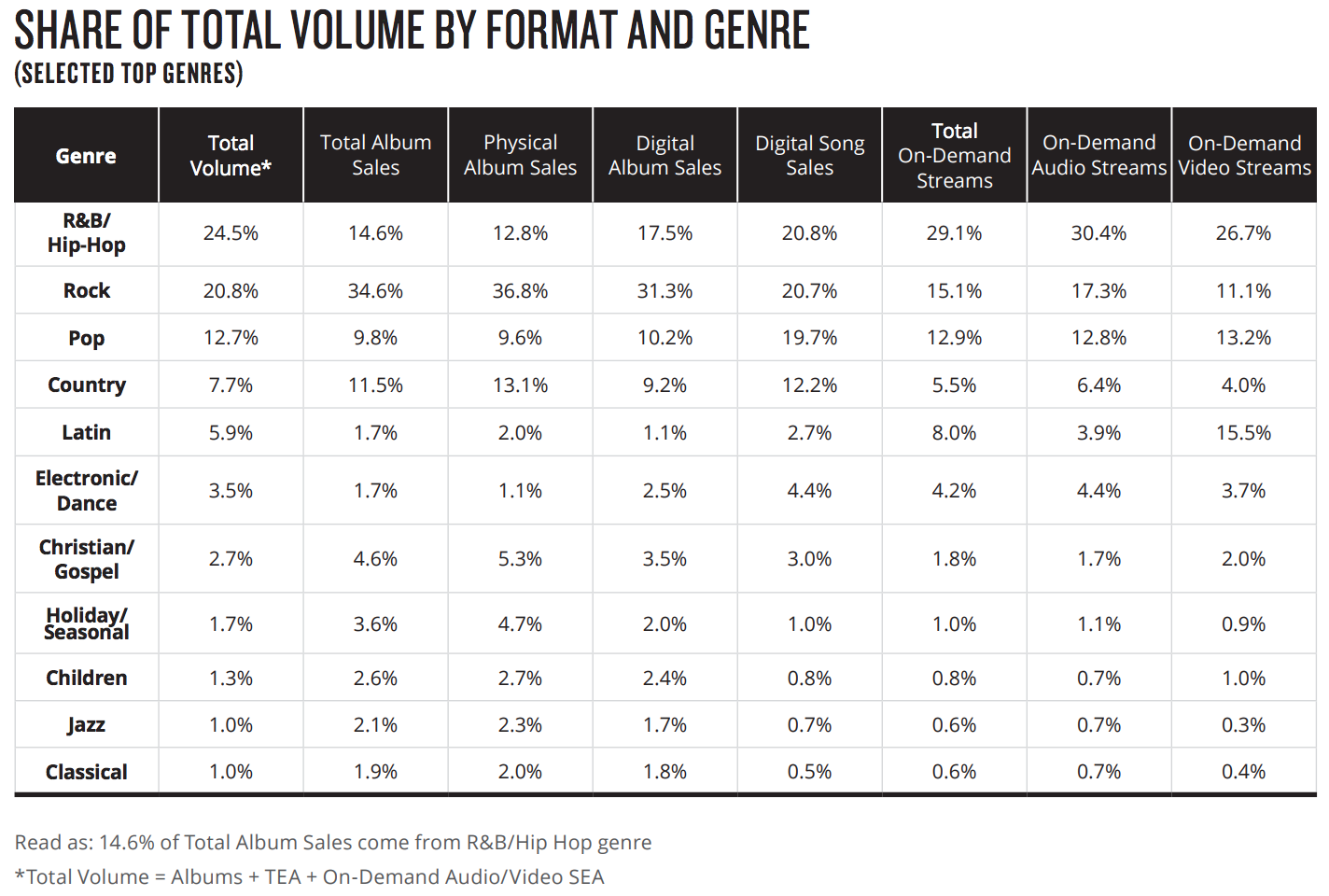 7. Over 50% of the money consumers spend on music goes “live music admission.”

In 2017, half of the United States’ general population attended at least one type of live-music event — 33% attended concerts; 18% went to music festivals; 24% attended small live music sessions; and 18% flocked to club events with DJs. Millennials (those aged 18-34) were the most likely of all age groups to see live music.